The Revenue-Evil Curve: a different way to think about prioritizing public goods funding


 The Revenue-Evil Curve: a different way to think about prioritizing public goods funding

But more importantly, when the abstract category of non-excludable non-rivalrous public goods interacts with the real world, in almost any specific case there are all kinds of subtle edge cases that need to be treated differently. A park is a public good. But what if you add a $5 entrance fee? What if you fund it by auctioning off the right to have a statue of the winner in the park's central square? What if it's maintained by a semi-altruistic billionaire that enjoys the park for personal use, and designs the park around their personal use, but still leaves it open for anyone to visit?

This post will attempt to provide a different way of analyzing "hybrid" goods on the spectrum between private and public: the revenue-evil curve. We ask the question: what are the tradeoffs of different ways to monetize a given project, and how much good can be done by adding external subsidies to remove the pressure to monetize? This is far from a universal framework: it assumes a "mixed-economy" setting in a single monolithic "community" with a commercial market combined with subsidies from a central funder. But it can still tell us a lot about how to approach funding public goods in crypto communities, countries and many other real-world contexts today.

The traditional framework: excludability and rivalrousness

Let us start off by understanding how the usual economist lens views which projects are private vs public goods. Consider the following examples:

We put these situations on a chart with two axes: 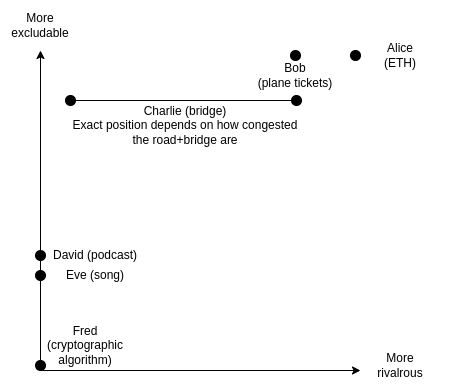 This is all a good and important analysis. Excludability tells us whether or not you can fund the project by charging a toll as a business model, and rivalrousness tells us whether exclusion is a tragic waste or if it's just an unavoidable property of the good in question that if one person gets it another does not. But if we look at some of the examples carefully, especially the digital examples, we start to see that it misses a very important issue: there are many business models available other than exclusion, and those business models have tradeoffs too.

Consider one particular case: David's podcast versus Eve's song. In practice, a huge number of podcasts are released mostly or completely freely, but songs are more often gated with licensing and copyright restrictions. To see why, we need only look at how these podcasts are funded: sponsorships. Podcast hosts typically find a few sponsors, and talk about the sponsors briefly at the start or middle of each episode. Sponsoring songs is harder: you can't suddenly start talking about how awesome Athletic Greens* are in the middle of a love song, because come on, it kills the vibe, man!

Can we get beyond focusing solely on exclusion, and talk about monetization and the harms of different monetization strategies more generally? Indeed we can, and this is exactly what the revenue/evil curve is about.

The revenue-evil curve of a product is a two-dimensional curve that plots the answer to the following question:

How much harm would the product's creator have to inflict on their potential users and the wider community to earn $N of revenue to pay for building the product?

The word "evil" here is absolutely not meant to imply that no quantity of evil is acceptable, and that if you can't fund a project without committing evil you should not do it at all. Many projects make hard tradeoffs that hurt their customers and community in order to ensure sustainable funding, and often the value of the project existing at all greatly outweighs these harms. But nevertheless, the goal is to highlight that there is a tragic aspect to many monetization schemes, and public goods funding can provide value by giving existing projects a financial cushion that enables them to avoid such sacrifices.

Here is a rough attempt at plotting the revenue-evil curves of our six examples above: 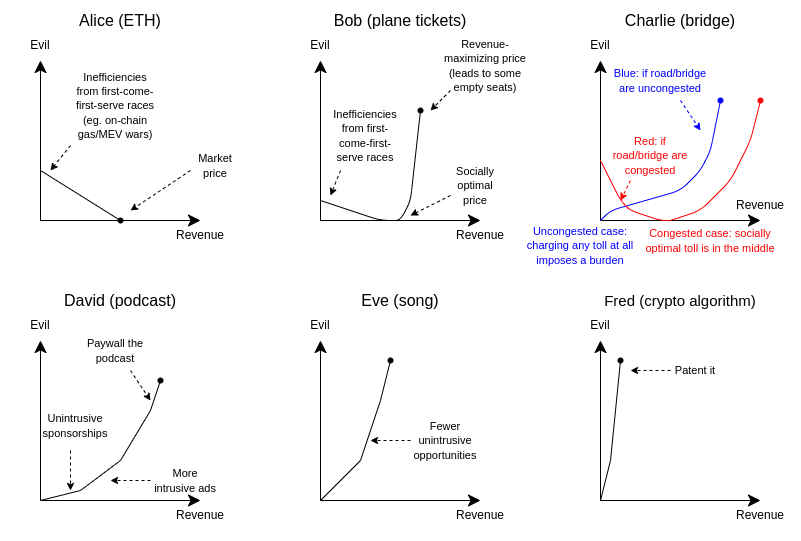 What we see here is that there are actually many kinds of "evil" on the revenue-evil curve:

In many cases, this evil is very context-dependent. Patenting is both extremely harmful and ideologically offensive within the crypto space and software more broadly, but this is less true in industries building physical goods: in physical goods industries, most people who realistically can create a derivative work of something patented are going to be large and well-organized enough to negotiate for a license, and capital costs mean that the need for monetization is much higher and hence maintaining purity is harder. To what extent advertisements are harmful depends on the advertiser and the audience: if the podcaster understands the audience very well, ads can even be helpful! Whether or not the possibility to "exclude" even exists depends on property rights.

But by talking about committing evil for the sake of earning revenue in general terms, we gain the ability to compare these situations against each other.

What does the revenue-evil curve tell us about funding prioritization?

Now, let's get back to the key question of why we care about what is a public good and what is not: funding prioritization. If we have a limited pool of capital that is dedicated to helping a community prosper, which things should we direct funding to? The revenue-evil curve graphic gives us a simple starting point for an answer: direct funds toward those projects where the slope of the revenue-evil curve is the steepest.

We should focus on projects where each $1 of subsidies, by reducing the pressure to monetize, most greatly reduces the evil that is unfortunately required to make the project possible. This gives us roughly this ranking:

One practical example of how this framework can be used to analyze decision-making is Wikimedia donations. I personally have never donated to Wikimedia, because I've always thought that they could and should fund themselves without relying on limited public-goods-funding capital by just adding a few advertisements, and this would be only a small cost to their user experience and neutrality. Wikipedia admins, however, disagree; they even have a wiki page listing their arguments why they disagree.

Revenue-evil curves are an intellectual tool, NOT a good direct mechanism

One important conclusion that it is important NOT to take from this idea is that we should try to use revenue-evil curves directly as a way of prioritizing individual projects. There are severe constraints on our ability to do this because of limits to monitoring.

For these reasons, it is probably best to use the framework not as a way to allocate decisions directly, but to identify general principles for what kinds of projects to prioritize funding for. For example, the framework can be a valid way to determine how to prioritize whole industries or whole categories of goods. It can help you answer questions like: if a company is producing a public good, or is making pro-social but financially costly choices in the design of a not-quite-public good, do they deserve subsidies for that? But even here, it's better to treat revenue-evil curves as a mental tool, rather than attempting to precisely measure them and use them to make individual decisions.

Excludability and rivalrousness are important dimensions of a good, that have really important consequences for its ability to monetize itself, and for answering the question of how much harm can be averted by funding it out of some public pot. But especially once more complex projects enter the fray, these two dimensions quickly start to become insufficient for determining how to prioritize funding. Most things are not pure public goods: they are some hybrid in the middle, and there are many dimensions on which they could become more or less public that do not easily map to "exclusion".

Looking at the revenue-evil curve of a project gives us another way of measuring the statistic that really matters: how much harm can be averted by relieving a project of one dollar of monetization pressure? Sometimes, the gains from relieving monetization pressure are decisive: there just is no way to fund certain kinds of things through commercial channels, until you can find one single user that benefits from them enough to fund them unilaterally. Other times, commercial funding options exist, but have harmful side effects. Sometimes these effects are smaller, sometimes they are greater. Sometimes a small piece of an individual project has a clear tradeoff between pro-social choices and increasing monetization. And, still other times, projects just fund themselves, and there is no need to subsidize them - or at least, uncertainties and hidden information make it too hard to create a subsidy schedule that does more good than harm. It's always better to prioritize funding in order of greatest gains to smallest; and how far you can go depends on how much funding you have.