A Guide to 99% Fault Tolerant Consensus


 A Guide to 99% Fault Tolerant Consensus

Special thanks to Emin Gun Sirer for review

We've heard for a long time that it's possible to achieve consensus with 50% fault tolerance in a synchronous network where messages broadcasted by any honest node are guaranteed to be received by all other honest nodes within some known time period (if an attacker has more than 50%, they can perform a "51% attack", and there's an analogue of this for any algorithm of this type). We've also heard for a long time that if you want to relax the synchrony assumption, and have an algorithm that's "safe under asynchrony", the maximum achievable fault tolerance drops to 33% (PBFT, Casper FFG, etc all fall into this category). But did you know that if you add even more assumptions (specifically, you require observers, ie. users that are not actively participating in the consensus but care about its output, to also be actively watching the consensus, and not just downloading its output after the fact), you can increase fault tolerance all the way to 99%?

This has in fact been known for a long time; Leslie Lamport's famous 1982 paper "The Byzantine Generals Problem" (link here) contains a description of the algorithm. The following will be my attempt to describe and reformulate the algorithm in a simplified form.

Suppose that there are \(N\) consensus-participating nodes, and everyone agrees who these nodes are ahead of time (depending on context, they could have been selected by a trusted party or, if stronger decentralization is desired, by some proof of work or proof of stake scheme). We label these nodes \(0 ...N-1\). Suppose also that there is a known bound \(D\) on network latency plus clock disparity (eg. \(D\) = 8 seconds). Each node has the ability to publish a value at time \(T\) (a malicious node can of course propose values earlier or later than \(T\)). All nodes wait \((N-1) \cdot D\) seconds, running the following process. Define \(x : i\) as "the value \(x\) signed by node \(i\)", \(x : i : j\) as "the value \(x\) signed by \(i\), and that value and signature together signed by \(j\)", etc. The proposals published in the first stage will be of the form \(v: i\) for some \(v\) and \(i\), containing the signature of the node that proposed it.

At time \(T + (N-1) \cdot D\), nodes stop listening. At this point, there is a guarantee that honest nodes have all "validly seen" the same set of values. 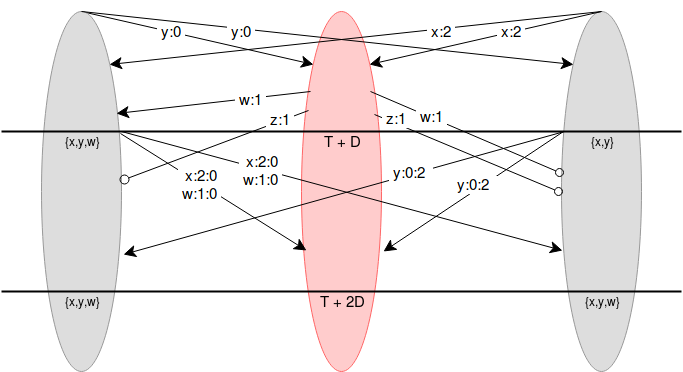 If the problem demands choosing one value, they can use some "choice" function to pick a single value out of the values they have seen (eg. they take the one with the lowest hash). The nodes can then agree on this value.

Now, let's explore why this works. What we need to prove is that if one honest node has seen a particular value (validly), then every other honest node has also seen that value (and if we prove this, then we know that all honest nodes have seen the same set of values, and so if all honest nodes are running the same choice function, they will choose the same value). Suppose that any honest node receives a message \(v : i[1] : ... : i[k]\) that they perceive to be valid (ie. it arrives before time \(T + k \cdot D\)). Suppose \(x\) is the index of a single other honest node. Either \(x\) is part of \({i[1] ... i[k]}\) or it is not.

Notice that the algorithm uses the act of adding one's own signature as a kind of "bump" on the timeout of a message, and it's this ability that guarantees that if one honest node saw a message on time, they can ensure that everyone else sees the message on time as well, as the definition of "on time" increments by more than network latency with every added signature. 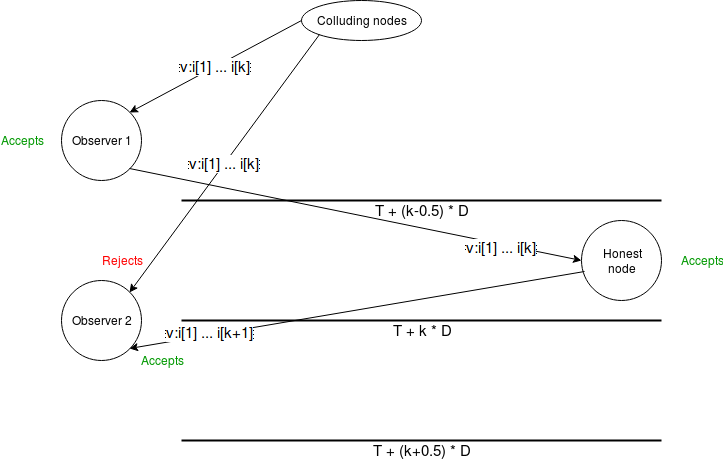 Retrofitting onto other consensus algorithms

The above could theoretically be used as a standalone consensus algorithm, and could even be used to run a proof-of-stake blockchain. The validator set of round \(N+1\) of the consensus could itself be decided during round \(N\) of the consensus (eg. each round of a consensus could also accept "deposit" and "withdraw" transactions, which if accepted and correctly signed would add or remove validators into the next round). The main additional ingredient that would need to be added is a mechanism for deciding who is allowed to propose blocks (eg. each round could have one designated proposer). It could also be modified to be usable as a proof-of-work blockchain, by allowing consensus-participating nodes to "declare themselves" in real time by publishing a proof of work solution on top of their public key at th same time as signing a message with it.

We can retrofit the latency-dependent algorithm onto this structure, giving always-online observers access to a kind of "strong finality" on checkpoints, with fault tolerance ~95% (you can push this arbitrarily close to 100% by adding more validators and requiring the process to take longer).

Every time the time reaches some multiple of 4096 seconds, we run the latency-dependent algorithm, choosing 512 random nodes to participate in the algorithm. A valid proposal is any valid chain of values that were finalized by the threshold-dependent algorithm. If a node sees some finalized value before time \(T + k \cdot D\) (\(D\) = 8 seconds) with \(k\) signatures, it accepts the chain into its set of known chains and rebroadcasts it with its own signature added; observers use a threshold of \(T + (k - 0.5) \cdot D\) as before.

The "choice" function used at the end is simple:

If 5% of validators are honest, there is only a roughly 1 in 1 trillion chance that none of the 512 randomly selected nodes will be honest, and so as long as the network latency plus clock disparity is less than \(\frac{D}{2}\) the above algorithm will work, correctly coordinating nodes on some single finalized value, even if multiple conflicting finalized values are presented because the fault tolerance of the threshold-dependent algorithm is broken.

If the fault tolerance of the threshold-dependent consensus algorithm is met (usually 50% or 67% honest), then the threshold-dependent consensus algorithm will either not finalize any new checkpoints, or it will finalize new checkpoints that are compatible with each other (eg. a series of checkpoints where each points to the previous as a parent), so even if network latency exceeds \(\frac{D}{2}\) (or even \(D\)), and as a result nodes participating in the latency-dependent algorithm disagree on which value they accept, the values they accept are still guaranteed to be part of the same chain and so there is no actual disagreement. Once latency recovers back to normal in some future round, the latency-dependent consensus will get back "in sync".