The Triangle of Harm


 The Triangle of Harm The following is a diagram from a slide that I made in one of my presentations at Cornell this week: 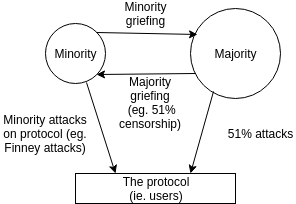 If there was one diagram that could capture the core principle of Casper's incentivization philosophy, this might be it. Hence, it warrants some further explanation.

The essence of Casper's philosophy is this: for all four categories of attack, we want to put an upper bound on the ratio between the amount of harm suffered by the victims of the attack and the cost to the attacker. In some ways, every design decision in Casper flows out of this principle.

This differs greatly from the usual proof of work incentivization school of thought in that in the proof of work view, the last two attacks are left undefended against. The first two attacks, Finney attacks and feather forking, are costly because the attacker risks their blocks not getting included into the chain and so loses revenue. If the attacker is a majority, however, the attack is costless, because the attacker can always guarantee that their chain will be the main chain. In the long run, difficulty adjustment ensures that the total revenue of all miners is exactly the same no matter what, and this further means that if an attack causes some victims to lose money, then the attacker gains money.

This property of proof of work arises because traditional Nakamoto proof of work fundamentally punishes dissent - if you as a miner make a block that aligns with the consensus, you get rewarded, and if you make a block that does not align with the consensus you get penalized (the penalty is not in the protocol; rather, it comes from the fact that such a miner expends electricity and capital to produce the block and gets no reward).

Casper, on the other hand, works primarily by punishing equivocation - if you send two messages that conflict with each other, then you get very heavily penalized, even if one of those messages aligns with the consensus (read more on this in the blog post on "minimal slashing conditions"). Hence, in the event of a finality reversion attack, those who caused the reversion event are penalized, and everyone else is left untouched; the majority can attack the protocol only at heavy cost, and the majority cannot cause the minority to lose money.

This touches on a fundamental dichotomy: speaker/listener fault equivalence. 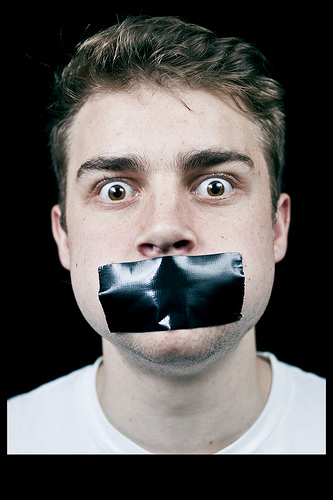 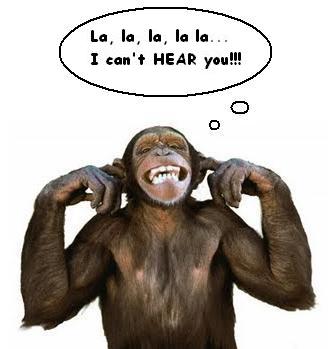 Suppose that person B says that they did not receive a message from person A. There are two possible explanations: (i) person A did not send the message, (ii) person B pretended not to hear the message. Given just the evidence of B's claim, there is no way to tell which of the two explanations is correct. The relation to blockchain protocol incentivization is this: if you see a protocol execution where 70% of validators' messages are included in the chain and 30% are not, and see nothing else (and this is what the blockchain sees), then there is no way to tell whether the problem is that 30% are offline or 70% are censoring. If we want to make both kinds of attacks expensive, there is only one thing that we can do: penalize both sides.

In general, wherever a speaker/listener dichotomy exists, the griefing factor cannot be globally bounded above by any value below 1. The reason is simple: either side can grief the other, so if side \(A\) can grief side \(B\) with a factor of \(x\) then side \(B\) can grief side \(A\) with a factor of \(\frac{1}{x}\); \(x\) and \(\frac{1}{x}\) cannot both be below 1 simultaneously. We can play around with the factors; for example, it may be considered okay to allow griefing factors of 2 for majority attackers in exchange for keeping the griefing factor at 0.5 for minorities, with the reasoning that minority attackers are more likely. We can also allow griefing factors of 1 for small-scale attacks, but specifically for large-scale attacks force a chain split where on one chain one side is penalized and on another chain another side is penalized, trusting the market to pick the chain where attackers are not favored. Hence there is a lot of room for compromise and making tradeoffs between different concerns within this framework.

This introduces the concept of the protocol utility function - a formula that tells us how well the protocol is doing, that should ideally be calculable from inside the blockchain. In the case of a proof of work chain, this could be the percentage of all blocks produced that are in the main chain. In Casper, protocol utility is zero for a perfect execution where every epoch is finalized and no safety failures ever take place, with some penalty for every epoch that is not finalized, and a very large penalty for every safety failure. If a protocol utility function can be formalized, then penalties for faults can be set as close to the loss of protocol utility resulting from those faults as possible.